The debate between radiant cooling and forced air is one that has been going on for some time. In fact, at various points in human history, people have had to weigh up the pros and cons of both systems in order to survive scorching summer temperatures.

Today’s debate has evolved somewhat from those cave-dwelling days. Energy efficiency, cost and thermal comfort seem to be the main concerns of engineers, architects and owners. The question people often find themselves asking is, “What is the best way to cool my building?” Both technologies certainly answer that question but the angle of approach is rather different. There are positives and negatives associated with both systems in their quest to keep building occupants cool and comfortable.

A Look at Radiant Cooling

A radiant distribution system uses a series of piping, pumps and control valves to deliver chilled or heated water through the floors, ceiling or walls. These temperature controlled surfaces reduce the indoor temperature by removing the sensible heat through thermal radiation.

This radiant process has a negligible effect on air temperature. The air is in turn cooled when it comes into contact with the cooled surface through the process of convection. 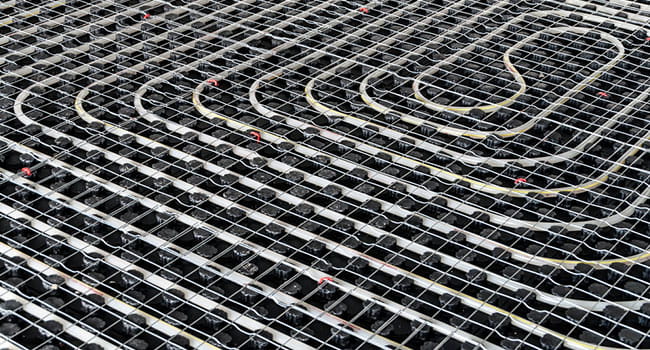 The method of cooling is widely used in net-zero-energy (NZE) buildings and other ultra-low energy builds. The system uses water as the main cooling fluid creating a hydronic system. Water is extremely effective as a cooling fluid and far surpasses air in this application.

Radiant systems are still required to move air for ventilation purposes. Usually combined with Dedicated Outdoor Air Systems (DOAS), this space conditioning system still manages to reduce overall energy requirements when compared to HVAC systems. Savings of up to 50% can be achieved when compared to similar buildings using a standard forced air system.

The graph shows results from a simulated study done by the Moore, T. Center for the Built Environment at the University of California Berkeley. The Radiant + DOAS reduced the HVAC cooling load from 10.6 mWh to 5 mWh, and energy savings was 58-66% over these commonly applied HVAC systems. 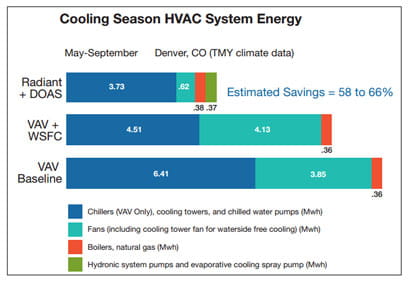 Recent advancements in materials and manufacturing techniques such as Uponor’s prefabricated rollout mats have contributed to a significant decline in both material and installation costs.

On new builds radiant systems can lower building costs with the piping used for cooling incorporated into precast concrete flooring and the reduction of ceiling heights since only about 20% of the ducting is required as compared to traditional systems. 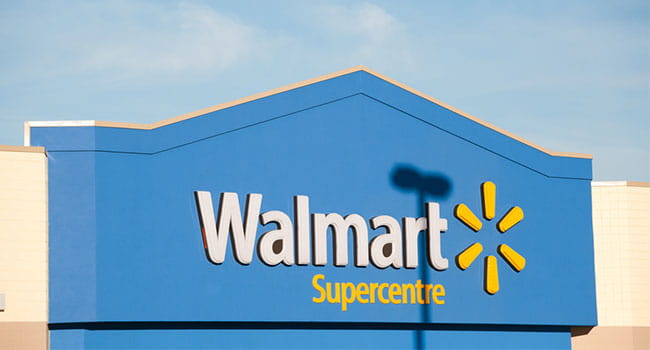 Thermal comfort is a vital part of any buildings cooling system. An all-air systems control only the air temperature while a radiant system combined with a ventilation system controls both the air and radiant temperature. The level of thermal comfort experienced by a building’s occupants is dictated by both of these factors.

A common problem faced in warm and humid climates is perspiration. People enter a building on a warm day and naturally perspire as their bodies attempt to cool down. In a building cooled with a traditional HVAC system there is a lot of air moving around. Although the temperature is correct, occupants are easily overcooled.

A radiant system removes excess airflow and helps occupants cool down by absorbing their excess heat. It is efficient and comfortable.

A Look at All-Air Systems

A forced-air or HVAC system refers to one which uses air as its heat transfer medium. These systems rely on ductwork, vents, and plenums as means of air distribution, separate from the actual heating and air conditioning systems.


The system carries the warm air from several large return grills (vents) to a central air handler for cooling. The air is then directed from the central unit to the rooms which the system is designed to cool.

All of these systems consist of an air filter, blower, heat exchanger, and various controls. Like any other kind of central air conditioning system, thermostats are used to control forced air cooling systems. 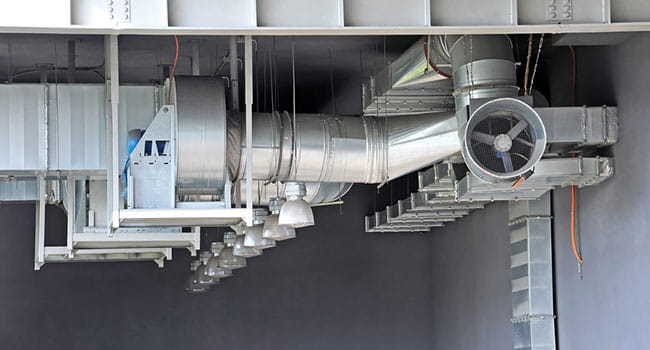 Traditional forced air systems provide quick and effective cooling due to air flow. The effect of cooling is almost instantaneous when entering a building on a hot day and have the cooled air rush through the space. The risk faced with such rapid cooling or heating is overcooling or overheating.

The ductwork installed for a forced air system can be utilized for both heating and cooling functions. The combination of a central heating furnace and air conditioning are widely available. Both systems utilize the same blower for air circulation and push heated or cooled air through the same labyrinth of ductwork. Catering for all seasonal comfort requirements by using a single system is particularly cost-effective.

This particular system benefits from being widely adopted as a standard means of cooling. Contractors and installers are well versed with this technology resulting in reduced installation and maintenance costs. This widespread adoption also means that parts are readily available for speeding up repairs and installation. 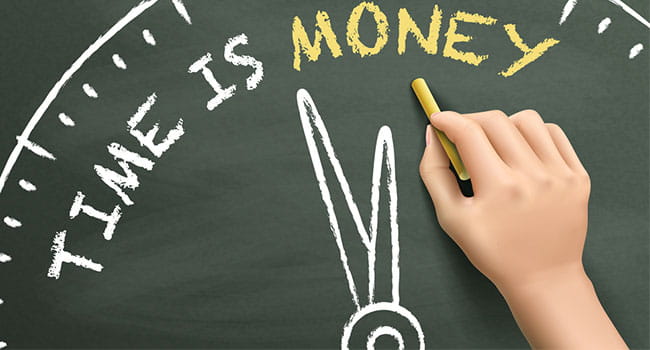 Healthy indoor air quality is an important function of any comfort system. Forced air systems utilize air filters to improve the quality of air within a building.

The air circulated through the building via a series of ducts where the air filters are installed. The filters trap particles and airborne impurities returning cleaner air back into the building.

In heavily polluted cities such as Beijing, having recently received the highest ever pollution warning alert, this air filtration is not just a creature comfort but a necessity. 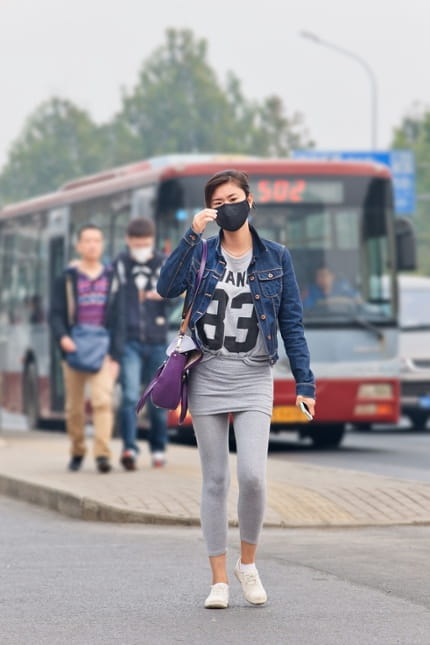 SDB-1, took a Jekyll and Hyde approach to cool. Half the building was optimized to use a variable air volume (VAV) system, while the other half had a radiant cooling system with a DOAS installed. Sophisticated measuring instruments were installed to track the impact of both systems. The image above shows the typical floor plan for SDB-1.

After two years the result was clear. The radiant system had used 34% less energy when compared to the VAV system. On top of that, the initial cost was also lower in the radiant system and a survey conducted of the building’s occupants found that thermal satisfaction was higher in the section that utilized the radiant cooling system.

In summary, it is clear to see that both means of cooling have their strengths. A forced air system is widely adopted making parts and professional installers readily available. Its versatility as both heating and cooling system in one and air purification make it an attractive option indeed.

Radiant conditioning systems, however, seem to hold all the trump cards. With the drive to build better, greener buildings while providing occupants with optimal thermal comfort and keeping costs under control, it provides architects, engineers and owners with the perfect means to achieve the desired outcome.